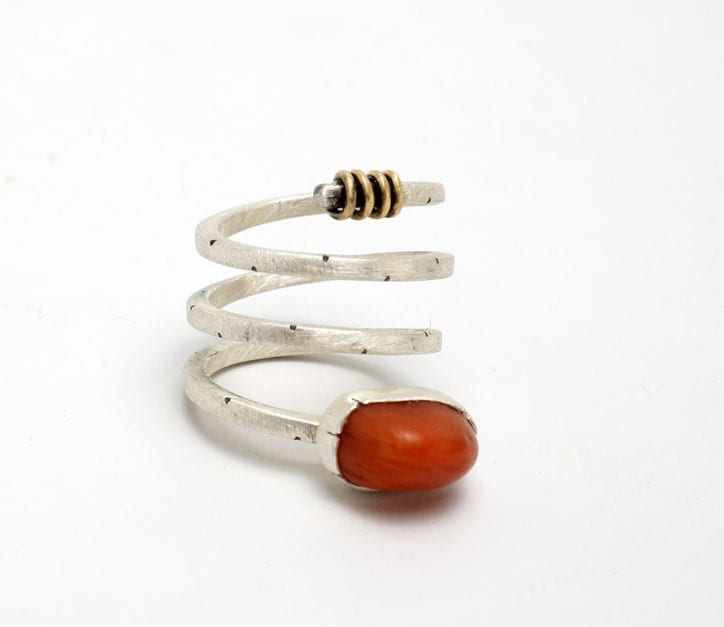 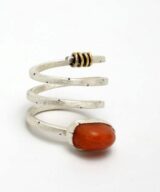 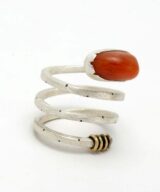 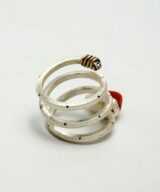 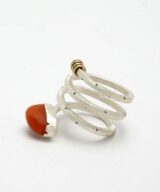 An interesting ring that wraps itself tantalizingly around your finger. Ring is set with a reddish “pebble”. Dark geometric shapes dot the band, which has a soft matte finish.

“Conceptualizing and creating artwork connects me to many things – the past and a connection to ancestors; self-identity; beauty and simplicity; my voice – a voice to speak about these connections and to address society at large.

In all my work I enjoy exploring the qualities that metal can offer both conceptually and aesthetically. Metal is an excellent conductor and I feel that this extends to conducting ideas through its markings and scars – a graphic record of ‘history’. Reticulation, stamping, raising, casting, and patination all add to the inherent beauty of the metal surface.

My most recent series is a running commentary on the politics of this new century – a way for me to express outrage, pose questions, and convey concerns about what is going on in the United States and how it affects Americans and the world. By

combining humor, serious subject matter and text I want to provoke and encourage a reaction to issues that I feel demand not only a rational response but also a response from the heart. It is my belief that our lives, which include current events, shape us mentally, spiritually and physically. My process in this series is to express a concept in text, fabric, stones and imagery and then enclose these materials in small frames. As the viewer comes in closer to see the details of each piece s/he becomes involved in the process of interpretation.

The “Genetic Memory” series has grown out of the connections I feel with the history of the Shawnee and my family. I use copper in the series to reference the mound builder cultures and the abundance of copper in the Great Lakes area – the cultures and geography related historically to the Shawnee. The horsehair signifies both the importance of the horse to the Shawnee and human hair – hair that carries our DNA, our genetic memory. I describe the figurative shapes I use in this series as “dresses” – having a feminine connotation, but others see them as “tunics” – masculine representations.

I am also inspired by language, history, texture, kinetics, beauty, and nature. I often embellish my pieces with freshwater pearls and other natural stones and beads such as turquoise, shell, and moonstone – materials that speak to me of earth and water. These ideas guide me in creating jewelry that I hope is entirely unique.”

1993: “Into the Forefront: American Indian Art in the Twentieth Century”, Denver Art Museum

1996: Panelist for ATLATL conference “Do We Really Have No Word for Art?” Tulsa

2010: Pendant from “Remembering” series republished in the book Pendants, published by Lark Books

2008: Pendant from the “Remembering” series selected for the book 500 Pendants & Lockets

2007: Two pairs of earrings selected for the book 500 Earrings, published by Lark Books

1994: Cyanotype triptych from “Bloodlines or Belief Systems” series published in the April issue of El Palacio, the magazine of the Museum of New Mexico

Present the public with alternatives to stereotypes about American Indians, continue to mature as an artist, and get people to think as I show my work far and wide.