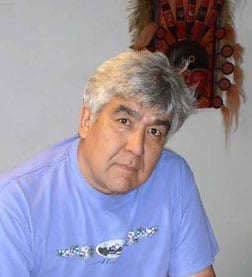 Jerry Jacob Laktonen, Alutiiq, was bom in 1951 on Kodiak Island, Alaska, and is strongly influenced by the traditional carving of his Alutiiq ancestors. His artwork has gained national recognition, including awards from the annual Santa Fe Indian Market. His masks and paddles are featured in four different permanent museum collections, as well as numerous private collections.

Due to massive destruction of the Alutiiq people and their culture that began in the 1800s by the Russians, Jerry grew up with little awareness of the carving tradition that is now his passion and his career. After an environmental disaster ruined his fishing career in the early 1990s, Jerry turned to carving.

While he had no formal art training, Jerry’s experience in repairing fishing boats gave him a foundation for further developing his talents with wood. Although Jerry’s ancestors used driftwood to fashion their carvings, his favorite material is old growth cedar. He adheres to the Alutiiq tradition of painting his pieces in vivid colors, in designs that are often rich with precise detail. Jerry insists on the cultural authenticity of his work, drawing on countless hours of study of museum pieces and photographs in books. Despite this quest for technical accuracy, Jerry is sure that a trance like “knowing” of ancestral presence ultimately inspires his carving.

One of only a few Alutiiq carvers of his generation, Jerry is perhaps the best known outside of Alaska. His mask, “Joe Hazelwood,” is featured in the traveling exhibit on Alutiiq culture, Looking Both Ways. It depicts the captain of the Exxon Valdez who was responsible for the massive 1989 oil spill that devastated the Prince William Sound the event that changed Jerry’s life.

With the fishing business destroyed, Jerry sought a new career and a new life. He wanted to re connect with his ancestry and provide hope for himself and others. Using his fisherman’s tenacity and focus, Jerry began a crash course to study traditional Alutiiq carving. Although he did not begin carving seriously until the age of 45, his work drew the attention of the Smithsonian Museum, which bought his first mask for their gift stores.